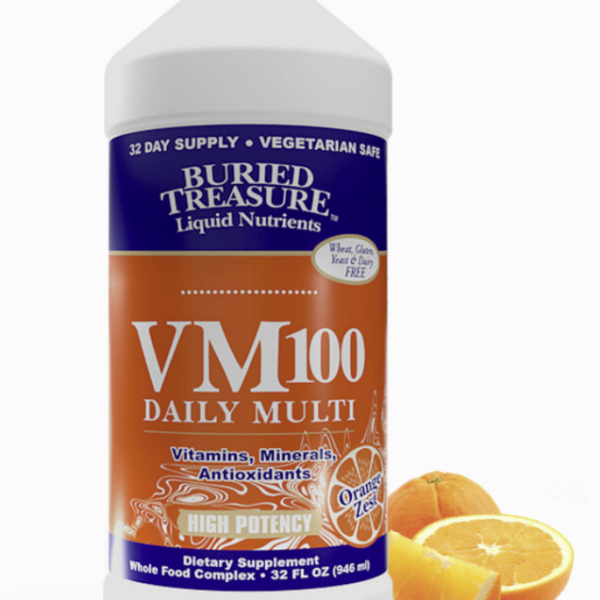 Gluten free Wheat free Yeast free Dairy free Vegetarian safe 32 oz bottle 32 day supply Daily nutritional supplement system for your active lifestyle The Liquid Advantage – is Buried Treasure Liquid Nutrient’s signature on being the leader in liquid supplements. Because VM 100 is a high potency blend of over 100 nutrients, we can condense all this nutrition into a two ounce (30ml) serving. Whereas it would take 40-60 different pills capsules or tablets to match the nutritional value in our VM 100 Daily Complete. It makes good health sense to take liquid nutrients considering you receive the most efficient and effective bioavailability of dietary supplements. It also makes good Dollars and Cents to get the most for your money when choosing your nutritional supplements. Buried Treasure Liquid Nutrients are formulated in an all natural base of fruit juices and do not contain the artificial colorings or fillings as commonly used in other products. For increased absorption and bioavailability choose BURIED TREASURE

BURIED TREASURE is manufactured by a privately owned company, Life Line Foods, which has been involved in the Health Food Industry since 1969. BURIED TREASURE is a nutriceutical division, founded in 1996, and specializes in the manufacturing of liquid minerals, liquid vitamins, and liquid specialty nutrient formulas. It is on the cutting edge of manufacturing high potency liquid complexes designed for efficient absorption and greater bioavailability.

Lester Burks is the Chief Managing Officer of Life Line Foods. Life Line Foods was founded by the Burks family in 1969 and has been serving the health food industry for over 45 years. In the early years they produced

organic breads which were hand-delivered to customers throughout the southeast, and later became the first producer of an all-organic frozen pizza to be sold nationwide. Lester Burks grew up in the family business, and over the years watched his mother struggle with painful rheumatoid arthritis.

Buried Treasure Liquid Nutrients was founded to fulfill a need for highly absorbable liquid nutrients that were both affordable and of the highest potency so they could deliver the lowest cost per milligram of utilized nutrients. Such is the passion that has driven the growth and acceptance of natural products industry.

Today Life Line Foods manufactures over 36 Buried Treasure Liquid Nutrient products. The Buried Treasure brand is featured in major health food stores chains and thousands of retail stores throughout the US and around the world.

Buried Treasure’s vision for the future to ensure the highest quality products with ease of use. Life Line Foods plans on rolling out many new products in easy to use portable nutritional supplements that can be taken anywhere!