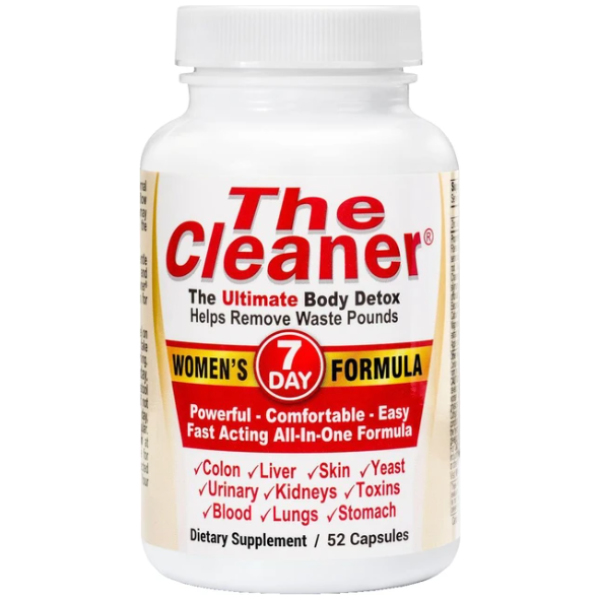 The Cleaner 7 Day Women’s Formula Detox is a powerful total internal cleansing support system.  The Cleaner® is fast and powerful yet gentle enough to allow you to travel, work and continue your normal routine.

The Cleaner 7 Day Woman’s Formula Detox is a powerful total internal cleansing support system.  The Cleaner® is fast and powerful yet gentle enough to allow you to travel, work and continue your normal routine.

Fibersol-2, soy fiber, oat bran, apple pectin, and psyllium husk: These are all soluble dietary fibers. Dietary fiber could be considered the sixth group of essential nutrients. Fibers are Mother Nature’s natural brooms. They help keep the colon and digestive system swept clean and healthy.
Ginger Root: Ginger is considered a tonic for the digestive tract, stimulating digestion, toning intestinal muscles and is commonly used for treating nausea.
Senna Leaf: Senna has been used for its laxative properties for centuries.
Aloe Vera Gel: Used externally to treat various skin conditions such as cuts, burns and eczema. Internally aloe vera gel is known to have antispasmodic activity.
Bentonite: Bentonite is a clay processed from volcanic ash. Studies show that the internal use of volcanic ash goes back to the indigenous peoples of the high Andes mountains, tribes in Central Africa and the aborigines of Australia. Taken internally, it supports the intestinal system in the elimination of toxins.
Yellow Dock Root: Used in cultures around the world for its reputation in supporting healthy blood and liver. It contains chemicals called anthroquinones which stimulate bowel movements.
Dandelion Root: Traditionally, dandelion has been used to cure breast illnesses, bloating, anddisorders of the gastrointestinal system. It is a gentle diuretic, flushing the kidneys.
Clove: Cloves are used as a carminative which helps dispel gas and increase hydrochloric acid in the stomach. Clove also improves peristalsis.
Black Walnut Bark: Herbalists have traditionally used the husks (hulls) of Black Walnuts as a nutritional aid for the intestinal tract in treating parasites.
Milk Thistle: Milk thistles have been reported to have protective effects on the liver and to improve its function.
Triphala Extract: Literally meaning “three fruits,” triphala is composed of the dried fruits of amalaki, bibhitaki and haritaki. Popular for its unique ability to gently cleanse and detoxify the body while simultaneously replenishing and nourishing it.

The Cleaner 7 Day Women’s Formula Detox
Elecampane Root: A perennial flower traditionally used to treat bronchial congestion.
Schizandra Berry: Schizandra lignans appear to protect the liver by activating the enzymes in liver cells that produce glutathione. Schizandra is an adaptogenic herb helping the body to deal with stress.
Cat’s Claw Bark: Oxyindole alkaloids in cat’s claw stimulate immune function. Alkaloids and glycosides in cat’s claw have also demonstrated anti-inflammatory and antioxidant activity.
Calcium Citrate: Calcium is the most abundant, essential mineral in the human body. Calcium is needed to form bones and teeth and is also required for blood clotting, transmission of signals in nerve cells, and muscle contraction. The importance of calcium for preventing osteoporosis is probably its most well-known role.
FOS Probiotic Growth Complex (fructo-oligosaccharides): FOS are complex carbohydrates that are not broken down by our digestive system, and upon reaching the lower intestines become food for beneficial bacteria. FOS are known as prebiotics because of their ability to promote the growth of probiotic bacteria. Pathogenic bacteria, in contrast, are unable to benefit from fructo-oligosaccharides.
Magnesium Citrate: Magnesium is the fourth most abundant mineral in the body and is essential to good health. Magnesium is needed for more than 300 biochemical reactions in the body. It helps maintain normal muscle and nerve function, keeps heart rhythm steady, supports a healthy immune system, and keeps bones strong. Magnesium also helps regulate blood sugar levels, promotes normal blood pressure, and is known to be involved in energy metabolism and protein synthesis.
Blessed Thistle: Believed to stimulate stomach acid secretion. Has been used as a treatment for indigestion or gas.
Red Clover: Taken internally, Red Clover is commonly used for cleansing the lungs.
Peppermint Leaf: Peppermint helps against upset stomachs and inhibits the growth of certain bacteria.
Wormwood: Wormwood is used for various digestion problems such as loss of appetite, upset stomach, gall bladder disease, and intestinal spasms.
Corn Silk: Corn silk has diuretic properties and has been known to benefit the urinary systems.
Saw Palmetto Berry (Men’s Formula Only): Saw palmetto is an herb that has been shown in clinical studies to have an important role in maintaining a healthy prostate.
Asian Ginseng (Men’s Formula Only): Asian ginseng is an adaptogenic herb that has been long used as the top male tonic for overall health, well being and stamina.
Sarsaparilla Root (Men’s Formula Only): Sarsaparilla has weak diuretic and laxative effects and is traditionally used for varying skin diseases.
Plantain Leaf (Men’s Formula Only): Traditionally used for gastrointestinal therapy among its many uses.
Chastetree Berry (Women’s Formula Only): Chaste Tree Berries (Vitex Angus-Cactus) stimulate the pituitary gland to produce more leutenizing hormone, this leads to greater production of progesterone during the second half of a woman’s cycle. Research has shown Vitex may help with premenstrual syndrome, amenorrhea, infertility, heavy or frequently occurring menses and hot flashes associated with peri-menopause.
Dong Quai (Women’s Formula Only): Dong Quai is sometimes referred to as the female ginseng. In Traditional Chinese Medicine, Dong Quai is often included in herbal combinations for abnormal menstruation, suppressed menstrual flow, dysmenorrhea (painful menstruation), and uterine bleeding. Dong Quai contains vitamins E, A and B12. Researchers have isolated at least six coumarin derivatives that exert antispasmodic and vasodilatory effects. Antispasmodics are a remedy for menstrual cramps.
Caprylic Acid (Women’s Formula Only): Caprylic acid is known to have anti-fungalproperties, and is often recommended by nutritionists for the treatment of candidiasis yeast infection

*Disclaimer: Statements made, or products sold through this website, have not been evaluated by the United States Food and Drug Administration. They are not intended to diagnose, treat, cure or prevent any disease.  Label Information is subject to change. Please check the label on the bottle for most recent information

was founded in 1988. We specialize in natural products for the improvement and health of the body. We are concerned with both the inner and outer person – men and women. You can find Century Systems products in over 10,000 stores worldwide and sold by natural health professionals, or maybe, they will find you. All you have to do is to call The Woman at 1-800-The-Woman. We believe that good and healing things are within the earth for our health, longevity and well-being. The more that man tampers with that which was created naturally, the more we deviate from that which is best. Our slogan, “The Power of Mother Nature” is a belief that within Mother Nature is not only the power to create and bring forth life but the power to restore.