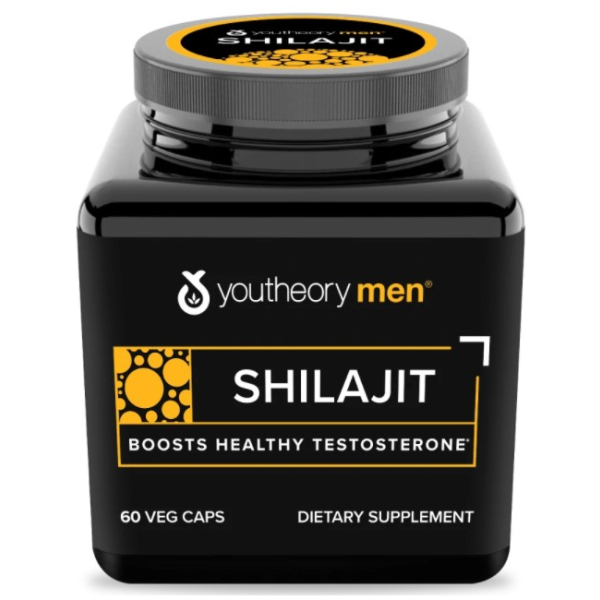 Youtheory Shilajit features PrimaVie®  is a genuine shilajit that is considered the best in the marketplace. This patent-protected, clinically studied and ultra-purified form of shilajit is harvested from the high-altitude regions of the Indian Himalayas.

Youtheory Mens Shilajit features PrimaVie®: a genuine shilajit that is considered the best in the marketplace. This patent-protected, clinically studied and ultra-purified form of shilajit is harvested from the high-altitude regions of the Indian Himalayas. It is carefully sourced, prepared and standardized to a minimum 50% fulvic acid to ensure maximum efficacy.

Fulvic acid (not to be confused with folic acid) is one of the most biologically-active compounds in soil. It is widely regarded (by scientists and farmers alike) as the most important element in healthy fertile topsoil. Fulvic acid is the end-product of nature’s decomposition process and is formed by microbial degradation of once-living matter, mostly plants. Fulvic acid serves numerous roles in plant science but has three primary functions: 1) to dissolve and transform rocks into “ionic” minerals that are usable by plants, animals and humans, 2) to bind and form complexes with a wide range of soil nutrients, and 3) to carry nutrients from plant surfaces into plant tissues. One molecule of fulvic acid is capable of binding over 60 trace elements at one time (including vitamins, minerals, enzymes, phytochemicals and more). And due to its incredibly small size, it can easily penetrate cell walls to deliver micro-nourishment to a plant’s metabolic centers (to improve growth and development). Fulvic acid is believed to account for many of the unique health properties of shilajit.* Interestingly, fulvic acid may help explain why shilajit is traditionally categorized as an “anupana” in Ayurveda (meaning a “vehicle” or “carrier” in Ayurvedic terminology). As an “anupana,” shilajit is said to greatly enhance the absorption and bioavailability of nutrients in the body and to act as a catalytic agent to promote the energetic effect of food compounds within living cells.*

Shilajit is legendary in the East and extensively mentioned in the Kama Sutra and other classical Indian texts. Shilajit is perhaps best known for its ability to boost testosterone and promote male reproductive health.* While it contains no hormones itself, it possesses a broad range of nutrients that target the male endocrine (hormone) system to bring about positively powerful change.* Modern scientific research has validated this millennia-old claim.

+ In another 90-day, randomized, double-blind, placebo-controlled clinical study, 500 mg of PrimaVie® shilajit was shown to increase total testosterone by 20% and free testosterone by 19%.* (Pandit et al. 2015)

In addition to boosting testosterone, shilajit also exerts other broad effects in the body.* Studies have begun to highlight its multiple uses for health and vitality, including:

+ supports the body during stress*

Shilajit (shee-la-jeet) is a mineral-rich substance harvested from the Himalayan mountains of India. Shilajit offers a myriad of positive health benefits, including testosterone support.* Youtheory Shilajit for Men features a patent-protected, clinically-studied and ultra-purified form of shilajit known as PrimaVie®.

Shilajit (pronounced “shee-la-jeet”) is one of the great wonders of Ayurveda (the traditional health system of India and the sister science of yoga). It is not an herb but a special type of “mineral pitch” that seeps from cracks in the Himalayan rocks during the warm summer months. This black gummy-resin is a complex mixture of humus (prehistoric plant deposits), rock minerals and organic substances that have been combined/compressed/transformed into an extraordinary superfood known to boost testosterone.* Shilajit is said to carry the power of the Himalayas and is considered by some scholars to be “Soma” (the secret substance used by Eastern alchemists to perfect the body and mind). True authentic shilajit is hard to come by and can be quite expensive. But the real thing only requires small doses to enliven your physiology.*